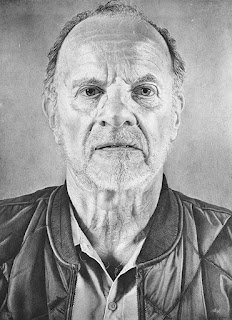 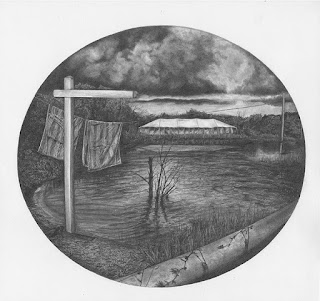 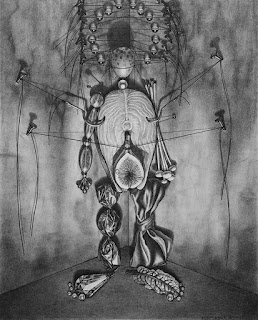 
From Kerry James Marshall on down, many of the city’s best known artists have been educators, but I can’t remember ever seeing a teacher/student exhibition outside an art school’s own gallery. Only in the strongly traditional arts, like Classical Realism, are lineages still held in high esteem. So this exhibition of James Valerio with two of his former students, Maria Tomasula and Mark Bowers, is an unusual event – but then, James Valerio is quite an unusual artist. Many artists meticulously copy photographs – but Valerio can infuse his interpretation with a formal idealism and tension that reaches as deep into minutiae as the eye can see. And though his subject matter is secular, his work feels Christian as it proclaims the special glory, mystery, and destiny of human life. The two monumental graphite portraits in this show radiate the intensity of a spiritual quest. Their subjects are unknown and may not even be Christian, but “There is no respect of persons with God” (Romans 2:11.) Valerio’s close-up view of refuse, “Mud”, was far less inspiring as shown in the gallery, beneath reflective glass, Online however, I was better able to feel depth in the shallow spaces—and then eventually discover the human face hiding in plain sight. “For dust thou art, and unto dust shalt thou return” (Genesis 3:19)

Both of Valerio’s former students, now with art and teaching careers of their own, also show highly detailed graphite drawings in this exhibit. But that is all they have in common with their teacher. Bowers creates dream-like views of Midwestern landscapes where nothing feels alive or natural. The circular edges confirm them as inner visions rather than windows on the world. The sky is ominous; the atmosphere dark and heavy; the foreground collapses into background. These are anxious nightmares. Tomasula draws still-life where the real subject always seems to be her own body. Because she is an artist, there is often an emphasis on the hands –up to five pair. Because she is a woman in a patriarchal society, her torso is conventionally presented as either a luxuriant flower or a gravid fruit. She feels distant from all of these roles –as if they chose her rather than the other way around. So the self she portrays is more like a dessicated biological specimen than a living human being.

It’s admirable that these students have taken what they wanted from a teacher, and then followed their own path. Their work feels more personal and especially relevant to the anxieties of their generation. But I do find the teacher’s work far more enjoyable, encouraging,and even amazing. I could not believe that the glowing highlights in his portraits were not achieved without a white crayon – but the artist has confirmed that he only used black graphite. The areas of intense brightness are just unmarked white paper And it’s always surprising to find a living figurative artist who presents a spirituality that is not only secular, but also unsentimental and non commercial. Though not as much fun as the leading Imagists, Bowers and Tomasula are firmly within the surrealist mainstream of post-war Chicago art. Valerio is closer to the naturalism, precision, and humanism of the Renaissance - which might even be re-born again someday. 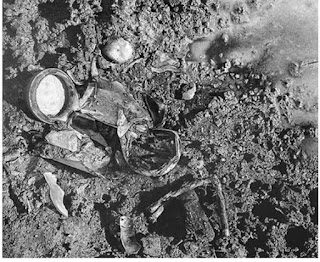 chris miller
I live life dangerously by ignoring the advice of Chuang Tzu: "Your life has a limit but knowledge has none. If you use what is limited to pursue what has no limit, you will be in danger". Badly spoiled by my wife, I spend mornings in sculpture studio, afternoons in record shop, evenings on the internet, weekends at the Palette and Chisel Academy and Art Institute of Chicago, and, the time spent in between, reading world literature. Am currently focused on the Middle East and South Asia.