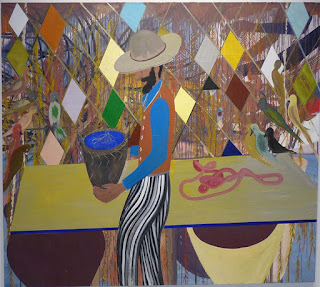 
Despite the title of this exhibit, “Pupil”, the artist, Shai Azoulay, is already a master of line and color.  At a distance,  you see stick figures;  moving up close, there appears the delicate expression of figurative structure and gesture.  Sometimes his color is so remarkable, it’s difficult to think about anything else.   He arranges clear, strong hues to maximize the effect of each .

The narratives are puzzling in the way that cartoons in the New Yorker can be.  Design makes the ambiance whimsical and sophisticated, while meaning can be elusive.   A few pieces feel like puzzling fables from the Arabian nights. One is set in a Middle Eastern souk. Often he presents a solitary figure in a vast desert.  That sense of isolation and child-like wonder recalls that classic of children’s literature, “The Little Prince” by Saint-Exupéry. Like its solitary hero, the artist is still exploring  the world beginning with himself.  He often includes what appear to be self portraits with a gentle, bearded face.   That face is the focus of attention in “Bus #69”, where a circle of people, young and old, are interconnected by glowing lines of thick, orange paint.  Are they his parents, friends and family?  In “Mingling”, that same face, now disembodied, is one of many mask-like heads on strings that comprise a Middle Eastern beaded curtain.  They must be the people who live and work in his neighborhood.

No sacred meta-narrative connects the depicted community, as it does on the facades of medieval cathedrals. There is a furtive quality in his painting of precious, small figures set against a thinly brushed void. It suggests that just as everything has quickly come together in a charming way – it may also vanish just as suddenly.  You might call it a nostalgia for the present.   Those who follow current events can guess why an Israeli artist might feel that way. He spells it out in “Study 2016”.  Two men face each other on a tight rope above an abyss.  Each carries a long pole for balance .  Or is it a weapon?  Neither is likely to reach the other side. 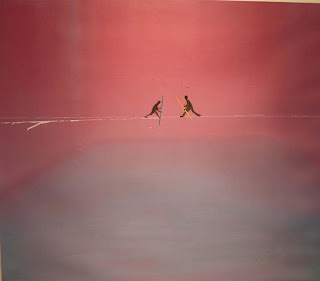 chris miller
I live life dangerously by ignoring the advice of Chuang Tzu: "Your life has a limit but knowledge has none. If you use what is limited to pursue what has no limit, you will be in danger". Badly spoiled by my wife, I spend mornings in sculpture studio, afternoons in record shop, evenings on the internet, weekends at the Palette and Chisel Academy and Art Institute of Chicago,